The Future of Birth. 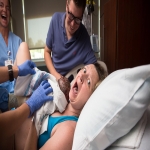 I cover the big topics here!

The hospital I did my formative training in was called the Countess of Chester ( Princess Diana at the time ).  It was a sink or swim place, as they were in the mid 1990's but it trained you well.  After my year there I moved to Australia and could run 90% of the demands a large birth centre could throw at you and I was 26 years old.   The Countess was a tight ship with a caesarean section rate of 14% which is hard to believe now.   It achieved this by a combination of smaller English babies, highly organised midwifes, experienced doctors and a degree of brutality.  One of my bosses was a big, intimidating Irishman who said to me "Listen boy, you'll never be as good as me because you kids aren't doing the hours anymore".  Nothing like encouragement.   But I was thinking about that comment and how it holds up today.  It is perhaps normal to look at the younger generation and wonder how standards will be maintained.  In the end I've delivered probably 40 times the number of babies he has because of the different system here so the Irishman need not have worried.

When I moved to Australia I started doing the long hours he had talked about.  In the UK the European union had made 56 hours the most you could do at the time, in Australia I was doing 80 to 90 most weeks.

Both countries have now brought that down to 48 hours so its about training smarter not longer.  Easier said than done.

Therefore its inevitable that the current set up in Australia will lead to rising caesarean section rates.  This will be due to the contrast of bigger Australian babies, an aging midwifery cohort, less experienced doctors and the ease of a caesarean section.  My opinion has always been that the skill in obstetrics is not doing a caesarean section it is taking someone through a difficult labour safely for mum and baby.

Its possible antibiotic resistance may change things but for now I don't see a problem with it.

But I'm a dinosaur to the trainees who for the first time are seeing more caesarean births as the majority in Newcastle Private Hospital - which is outdoing even the Sydney hospitals in that regard.

I'll be publishing my figures very soon which are overall constant but do show a gradually rising elective caesar rate, as it has for years my caesar rate remains about 10 - 15% less than the hospital average especially Emergency Caesareans where my rate is only 10% compared with the hospital average of 25%.  This suggests to me I am picking out the possible problem situations and converting my possible emergency CS to planned calm elective CS's, which I think is good.

But we'll see. I'll finish this thread later or move on with it on another soon.